Agenda available for final meeting of 2019

All residents welcome to the next meeting on Tuesday 17th December- 7pm at the Sports Pavilion. The councillors will be discussing next years budget – come along and see what they intend to spend the precept on! Go to https://islip-parish.co.uk/events/minutes/ page for all the details

Coming soon- to a letter box near you!!

The Islip Christmas newsletter is being circulated- an electronic copy is available on the https://islip-parish.co.uk/newsletters/ page

THE BIG ISLIP QUIZ IS BACK!!!!

Posted on November 27, 2019 by admin
Posted in Community News | Leave a comment

Please go to the https://islip-parish.co.uk/events/minutes/ page

Following a number of attempts to procure a replacement contract, a contract has been awarded to Whippet Coaches Limited in the last few days and today a registration has been received for a replacement for services 8 and 18.  Subject to approval from the Office of the Traffic Commissioner, a Government body, this will commence on Monday 28 October.

The timetables from Thrapston, Brigstock, Little Stanion, Stanion, Corby Old Village, Geddington and Weekley are comparable to the current timetables, albeit with slight amendments.  It is worth noting, however, that passengers from Brigstock who wish to arrive in Kettering before 1100 should travel on services towards Corby and remain on the bus.

Whippet Coaches, operating under the name “Go Whippet”, are based in Cambridgeshire between Huntingdon and Cambridge. As a result of this and the operator’s requirement to run buses to their depot to relieve drivers for a break, we are able to offer an experimental direct service from Corby and Thrapston to Huntingdon three times per day in the off-peak.  Full details can be found on the following link: http://www.go-whippet.co.uk/latest-news/news/

Please go to the https://islip-parish.co.uk/events/minutes/ page

All welcome to attend this next meeting at the Sports Paivlion, Toll Bar Rd, Islip- Agenda and papers available on the https://islip-parish.co.uk/events/minutes/ page

These can be found on the https://islip-parish.co.uk/events/minutes/ page

Notice of Conclusion of Audit

The External Auditors- PKF Littlejohn LLP have completed their review of the AGAR for year ending 31 March 2019. A copy of their report, along with Sec 1 & 2 and the Notice of Conclusion of Audit can be found on the Parish Council Noticeboard and on the Annual Return 2018-2019 page

This can be found on the https://islip-parish.co.uk/events/minutes/ page. After the Summer break, the Parish Council meet again. That’s not to say that they have been idling the summer away! Please come along to the next meeting, where there is a lot to discuss!

These can be found on the Minutes page https://islip-parish.co.uk/events/minutes/

All residents welcome to attend the next meeting of the Parish Council at Islip Sports Pavilion at 7.15pm. Please note there will be no meeting in August .

Community message from the Police

Posted on July 1, 2019 by Clerk
Posted in Community News | Leave a comment

Please see attached letter about a road closure due to works on a bridge extension joint over the River Nene in Thrapston . There is also a map of the diversion route

Agenda and papers for next meeting-18th June 2019

Please click on the following link to access this months minutes- who was voted in as the new Chairman??? https://islip-parish.co.uk/events/minutes/

The present service 8/18 arrangement, in addition to Little Stanion, is partly funded by other section 106 funding in Thrapston and the inclusion of two entitled home-to-school transport services within the timetable.  On bus takings and concessionary fares reimbursement cover about 55% of the net operating cost of the service.

At this rate, the funding will cease in September or October of this year and, given that the service does not cover costs, under these circumstances it is unlikely that any commercial operator would take over the service.  However, there is scope within the timetable to make measured reductions in order to reduce costs and prolong the life of the service.  These discussions have been on-going with Centrebus over the last month.

It is intended that a revised service comes into force from the end of May 2019, that achieves sufficient savings so that it is hoped that the service can continue until at least this time next year, or beyond if usage of the service continues to grow.  The final detailed timetables are still being drawn up, and will be shared in due course, however the headline changes that you should be aware of are as follows:

·         The service between Little Stanion and Corby will be reduced to approximately every 2 hours after 1000.  It is currently every hour, but usage data clearly shows that the busiest journey is the 0750 arrival in Corby, with busy journeys immediately after 0930 but otherwise low usage spread across the remaining journeys.  By removing the need for the bus to be in Little Stanion every hour, we can be more flexible with the way in which the buses are scheduled and we can incorporate drive rest breaks within the time.  This reduces costs a great deal.  There will also not be an opportunity to travel from Little Stanion to Kettering until a bus arriving at around 1300, outside of peak hours (see the next bullet point).

·         It is proposed that there will be a new journey from Corby to Kettering, on schooldays, arriving between 0800 and 0830, with a matching return journey in the afternoon.  The morning journey will not serve Wood Street, only the main road in Geddington in order to save time at busy peak hours.  To accommodate this, the 0750 arrival in Corby from Thrapston will be advanced to arrive at 0740.  This is subject to being able to accommodate the school bus from Gretton to Corby Business Academy elsewhere.

·         The Saturday service will be reduced to be operated by one bus instead of two.  As a consequence, rather than every 2 hours similar to weekdays, it will be much more based around a single journey from the villages to either Kettering or Corby, or between Raunds and Thrapston, outside of peak hours.

·         Journeys on service 18 will be centred around morning journeys to Raunds/Thrapston and afternoon journeys to Corby, rather than every 2 hours throughout.

·         Opportunities to access Corby from Geddington will be greatly reduced, and there is little evidence from the passenger loadings that there is demand for this.

·         There will be no notable reductions to services between Brambleside and Kettering, given that this is generating a significant amount of the usage, thus income, on the service.  Journeys between Geddington and Kettering will be retimed, with certain journeys stopping only on the main road in the village in the interest of making these journeys as quick as possible.  Return journeys from Kettering will all serve Wood Street, as now, as will the first two buses towards Kettering after 0930.

John Henry Group, on behalf of Gigaclear, are carrying out major telecom ducting works in the area and as part of this will be requiring a combination of traffic signals and road closures.
All the information is also on roadworks.org and linked to the permits so any changes to the dates will be reflected.

All residents welcome to attend the above meeting, to be held at the Sports Pavilion, Toll Bar Rd at 7.15pm.

Please click on the links for meeting paperwork Agenda

May Newsletter out now!

Islips’ newsletter will soon be dropping through your door with a wealth of information about the village. An electronic version is also available on this website on the Newsletters page

Northamptonshire Highways have informed us that the A6116 will be closed overnight 8pm-6am on the 2nd/3rd May to allow surface dressing to be done. Please see the attached PDF for further information

These are available on the Minutes page

Click on links for April Agenda 2019   and associated papers

It has come to the Parish Council attention, that there have been instances of dogs possibly consuming rat poison  around the lake/nine arches bridges.

Owners/Dog walkers are urged to be extra vigilant when walking in this area, and suggest keeping dogs on the lead.

Islip Parish Council are to delighted to announce that the refurbished recreation ground will be officially re-opened on Saturday 6th April at 11am by the Chairman of East Northants District Council- Cllr Wendy Brackenbury. 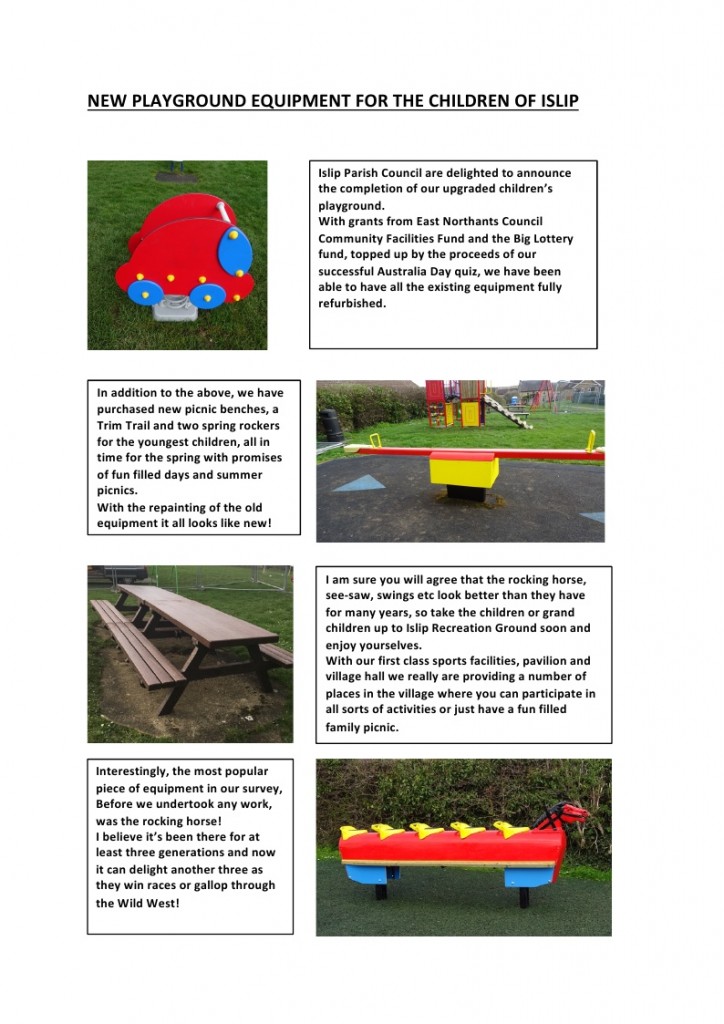 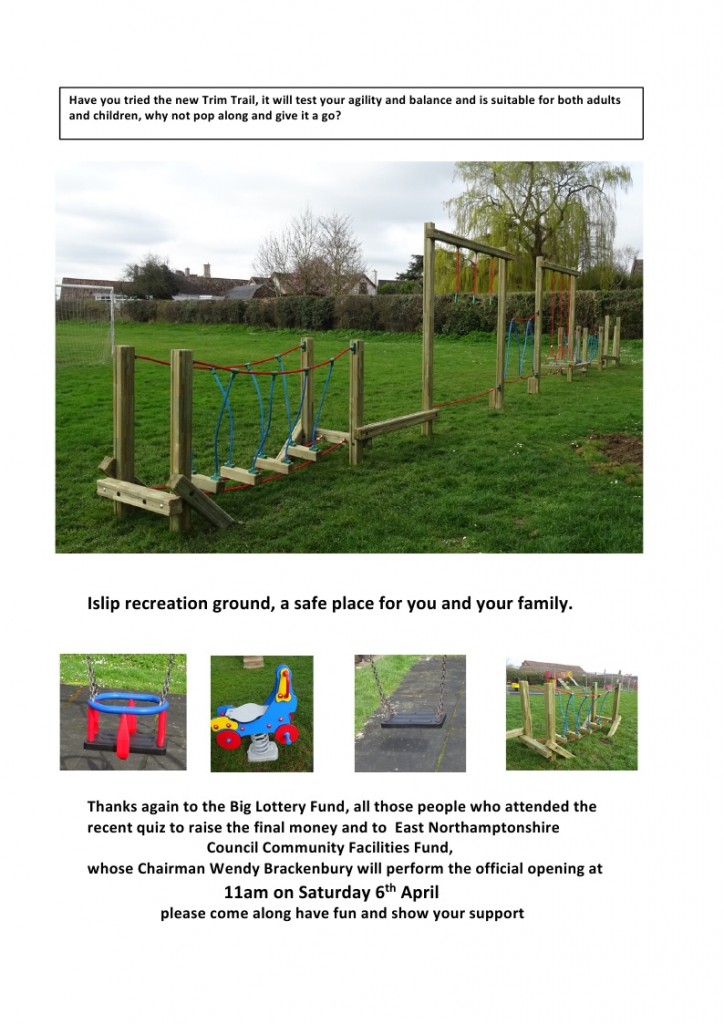 Thanks go to the lovely residents who have already volunteered to take part in the Annual Litter Pick, more help gratefully received

Please note that the litter pick will now be on 14th April meeting by the village sign at the top of Chapel Hill, time to be confirmed .
Gloves pickers bags etc to be supplied with tea or coffee and bacon rolls afterwards!

Come and meet the new Clerk!

Gigaclear, in conjunction with a County Council initiative will be installing fast broadband (up to 900 megabytes) to the North end of the village in the Summer. Currently there are no plans for the rest of the village, but if residents register their interest, and enough do so- it may be considered.